2023 Kpop World Tours and Concerts Schedule – Save Your Tickets Now 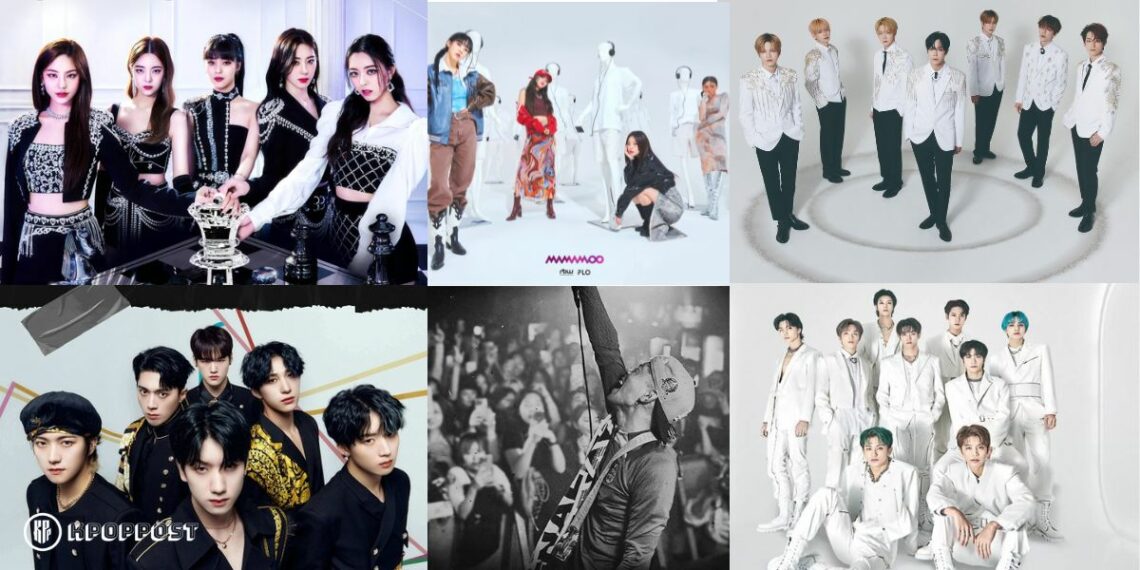 Tours and concerts are back to normal, including in the Kpop industry. 2022 served many iconic stage performances from various artists. With the year coming to an end, 2023 is ready to serve Kpop fans more world tours and concerts.

Following the release of their album Born Pink, BLACKPINK kickstarted their world tour. Jennie, Jisoo, Rose, and Lisa are ready to continue their Born Pink World Tour in 2023.

Among the bagful of 2023 Kpop World Tours and concerts, the Kpop boy group OnlyOneOf finally released a list of cities they will visit to perform their songs. Since their debut in 2019, OnlyOneOf has dropped many EPs and is ready to kickstart their American tour.

The legendary Kpop trio is now back with their Europe and North America world tours. It will be an epic performance from EPIK HIGH after a brief hiatus.

ATEEZ – THE FELLOWSHIP: BREAK THE WALL

ATEEZ extended the dates for their world tour, which started in 2022. THE FELLOWSHIP: BREAK THE WALL tour is coming along the way to Europe, which has fueled ATINY’s excitement.

Solo singer pH-1, who gained much fame in 2022, announced that he will join several Korean artists in the 2023 Kpop world tours and concerts. So far, pH-1 has only released the dates for his About Damn Time tour in North America. We’re still waiting for more dates and places.

Following their debut in 2020, P1harmony will join the lineup of 2023 Kpop world tours and concerts. They are going to the USA for their P1USTAGE H: P1ONEER for the first two months of 2023.

We are starting our tour from SEOUL 🔥
Are you guys READY?!

After his successful run in Europe, Khip-hop artist Loopy is now rolling out his North America tour. The title of his tour, DEPARTED, represents his distance away from home and his past, as well as embodies hopes for his new future.

The artists under the AOMG record label will be on tour around Asia. Simon Dominic, Loco, Gray, Leehi, and Yugyeom will spend January and February on their Follow The Movement Asia tour.

Did you guys cop the tickets for AOMG’s first ever world tour?

Kpop boy group under C9 Entertainment will also join the 2023 Kpop world tours. In January, they will perform live in their upcoming tour, Save Me, Kill Me, in Europe.

One of the Kpop boy groups who just debuted last year, EPEX, is already out to have their first World tour in the U.S. Their first tour, Eight Apex, is expected to be one of the immense 2023 Kpop World Tours and concerts.

Tickets are now LIVE🎉
🎬Don’t forget to Meet & Greet #EPEX after the show!

ITZY will have their first Kpop world tour in 2023. However, they have only released the date in Taipei so far. Fans worldwide eagerly await the reveal of the other countries and cities of ITZY’s CHECKMATE tour.

Another group from the bag of 2023 Kpop World tours who’ll be holding their first concert is Tan. Debuted earlier in 2022, the group is now ready to hit the road with many other 2023 K-pop concert dates lined up for their American Tour.

The South Korean soloist and multi-talented entertainer, Kang Daniel, will join the 2023 Kpop world tours and concerts schedule. His upcoming tour, First Parade, is set to happen in the UK, Europe, and North America. But, before that, Kang Daniel will also perform in Malaysia.

The Rose will continue their Heal Together World Tour in 2023. Starting from Indonesia, the group will spend their January in Asia continued to other countries across the continents.

Another South Korean singer joining the 2023 Kpop World tours and concerts is KISU with his Beyond World Tour, Will Be Fine in Europe. From February to March, KISU is set to perform in various cities across the continents.

Solar, Moonbyul, Wheein, and Hwasa are back with another world tour. In addition, they have released the dates for the MY CON Asia tour.

The fourth-gen Kpop boy group Stray Kids will continue their Maniac Tour in 2023. Following the release of their record-breaking album, Stray Kids’ Maniac Tour has become one of the most awaited Kpop world tours and concerts.

Korean rock group, N.Flying, is getting ready for liftoff on their first US Tour, Do What You Want.

Piling up on the lengthy list of 2023 Kpop World tours and concerts schedule, ONEUS has scheduled an exciting lineup of events throughout January and February. The group is set to perform on their first tour, Reach For Us, around the U.S. and Latin America.

One of the highly-anticipated 2023 Kpop world tours and concerts is Just Be with You in Latin America. The six-member group is set to start touring in January, along with fan sign events.

The South Korean rapper, Sik-K, joins the never-ending 2023 Kpop World tours and concerts schedule list. He has announced the dates and exciting line of cities in North America for his tour, Pop A Lot, from March to April.

The CEO of JYP Entertainment, Jin Young-park, is set to perform in a mini-tour after the release of his latest single, Groove Back. JYP will perform his most recent singles to the iconic old ones in the US, adding to the excitement surrounding the 2023 Kpop world tours and concerts.

Trot singer Lim Young Woong, who has proven his music and talent throughout 2022, is set to continue his Im Hero tour.

Ready for a fun family night out? LIM YOUNG WOONG is coming to the U.S.!

Magicman is coming to Paris, India, and Dubai. Jackson Wang’s concert, which began in 2022, will continue in 2023 in several diverse countries, adding to the exciting 2023 Kpop World tours and concerts that fans look forward to.

The 7-piece self-produced Kpop boy group is set to continue their tour in 2023. VERIVERY have announced two more dates in Asia. And many dates and cities are yet to come!