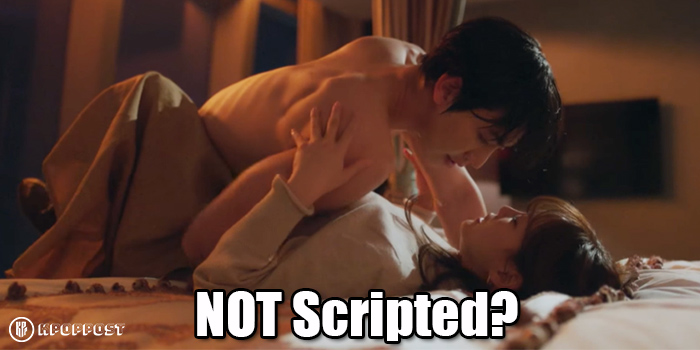 Former Gugudan member and Korean rising idol actress, Kim Sejeong, has suddenly revealed in an interview that the bed scene in “A Business Proposal” Kdrama episode 11 was actually NOT scripted. So does it mean they decided to do it by themselves? Or was it the director’s decision? Here’s the COMPLETE explanation from the lead actress.

CAUTION: THIS ARTICLE MAY CONTAIN SPOILER

One of the most appealing parts of the webtoon-adapted Kdrama, “A Business Proposal,” was its steamy bed scene in Episode 11 between the main characters, Kang Tae Moo and Shin Ha Ri.

In Episode 11, Kang Tae Moo rushed to find Shin Ha Ri after discovering that she had secretly gone to meet his grandfather, Chairman Kang. Once he found her, Kang Tae Moo hugged Shin Ha Ri and said, “Don’t disappear in front of me again,” words that were followed by the steamy bed scene in “A Business Proposal” Episode 11.

While the bed scene managed to keep the rating of “A Business Proposal” Kdrama over 10%, there were some hot debates regarding the bed scene episode of the Kdrama.

According to some fans, the bed scene between Kang Tae Moo and Shin Ha Ri in Episode 11 of “A Business Proposal” Kdrama was clumsy and awkward. Some viewers believe that it may be because of both actors’ lack of experience with romance, but some others think that the actors’ proportions and gestures make the scene strange and awkward.

There was also another possibility of the bed scene being awkward because of the rushing plotline.

this is the most awkward bed scene in the the history of kdrama i’m crying like why is he holding her like he’s the womanshdjsh pic.twitter.com/Lk47NRCRva

i dont think they have 0 chemistry at all. however, their bed scene was definitely awkward for me. it's a little bit stiff and unrealistic, imo. but i think its mostly because this is sj and ahs's first bed scene ever.

And I think, because the story is so fast forward, that makes the scene not really like heart fluttering. I think if they make the drama 16 episode long, then only we can feel the heart fluttering scene ?

On the other hand, loyal fans of “A Business Proposal” believe that the bed scene is just right as it is. That is because the slight clumsiness and awkwardness of the scene showed how innocent first-timers should have, and it means that both actors, Ahn Hyo Seop and Kim Sejeong, did a great job paying attention to the details.

Regarding the colossal bed scene in episode 11 of “A Business Proposal” Kdrama, actress Kim Sejeong recently revealed in an interview with Marie Claire that it was actually not in the script. However, considering how both characters have shown significant development in their emotions, they wanted to show this development as intensely as possible.

“The actors had great chemistry, so the level of skinship was steamier than what was in the script. The scene towards the end of the drama when Ha Ri and Tae Mi spend the night together wasn’t originally in the script. However, the emotions of love between the two characters grew, and the actors and director decided to show those emotions as much as possible.”

This statement brought the whole nation in shock and excitement as well. That is because while it’s shocking to have actors agree to a bed scene that was not originally on the script, it means that both Ahn Hyo Seop and Kim Sejeong are both professional and comfortable enough to ad-lib the scene together. And that is especially knowing how much both actors have shown heart-fluttering chemistry throughout the drama.

However, once her statement started circulating in public, Kim Sejeong posted an explanation, clarifying what really happened.

On April 7, Kim Sejeong took her explanation on her SNS, giving a complete clarification about her previous statement. According to Kim Sejeong, what she previously meant in the interview was only the details of the scene, not the entire bed scene in “A Business Proposal” episode 11.

Kim Sejeong further explained that both the actors and the production team came up with the details of the bed scene. Even though those details were not scripted in the original plan, both actors and the team felt that it was necessary to show how much the characters have grown.

“I didn’t mean that the bed scene was not in the original script. What I meant was that it wasn’t clearly written about what the scene would look like.

Rather than saying that we ad-libbed the scene, I should have said that the actors and staff came up with the scene together.”

What Does the Original Script of “A Business Proposal” Episode 11 Say About the Bed Scene?

Finally, Kim Sejeong further clarified that the bed scene in Episode 11 was there in the original script of “A Business Proposal”. Therefore, all the cast and crew members of the production were aware of the scene, and nobody came unprepared.

What was NOT on the script was the details of how the scene will come up together. Because on the original script of “A Business Proposal” Episode 11, the bed scene only goes:

“They kiss and embrace each other… it’s now morning.”

And since the bed scene has developed with so much more details and improvement, that was why Kim Sejeong stated that they ad-libbed the whole thing.

A Scene that Kim Sejeong Will NOT Regret

So, what do you think about this explanation? At the end of the day, despite which part of the scene was truly in the script, the main point was that both actors and staff completed everything professionally as well as comfortably as an individual. After all, Kim Sejeong once stated that the scene was not awkward for her at all.

“It was not an awkward moment for Tae Moo and Ha Ri. So, if you see Sejeong in the scene instead, it means that I did a terrible job at acting.

Besides, the director was also considerate while filming. He created an atmosphere that wouldn’t break the flow, and as an actor, it was a scene that I wouldn’t regret.”

In the meantime, here’s the alluring bed scene in episode 11 of “A Business Proposal”.

Get Well Soon! BTS Jin Will NOT Fully Participate in “Permission to Dance (PTD) on Stage” Las Vegas due to His Finger Injury