by Jessica H
in K-Variety
2

On July 20, BLACKPINK Rosé appearance as a part-time worker on JTBC ‘Sea of Hope’ (바라던 바다) seemed to bring more hope and emotion to the variety show. With Yoon Jong Shin leaving for a business trip, the ‘hosts’ needed to make an extra effort. Watch how BLACKPINK Rosé cover of ‘Because I Love You’ successfully melted everyone’s heart at the ‘Sea of Hope’ seaside bar.

Starting the seaside bar operation of the sunny day, the bar mood bartender, AKMU Suhyun, performed a cover of SSAK3 ‘Beach Again.’ This is a good song to start your vacation atthe beach during summer.

The performance followed by SHINee Onew who’s shifting the mood with his cover of Na Yoon Kwon ‘Expectation,’ and Sung Si Kyung ‘The Road to Me.’

Both idols then sang a duet cover of ‘Doll’s Dream.’

BLACKPINK Rosé finished the stage with the cover of the late singer Yoo Jae Ha, ‘Because I Love You.’ The deep, rich, sweet vocals of Rosé effortlessly brought specific emotions to the listeners.

Not only that, BLACKPINK Rosé also showed her skill in playing guitar and sang ‘The Only Exception’ originally by Paramore.

“I came here just now to sing, but when I carefully listened to the lyrics, I somehow thought of my parents. I felt a love that was solely for me, and I teared up without even realizing it. On a normal basis, I don’t think I expressed my emotions well, but when I listen to these kinds of songs, I think I start to understand my parents’ love better.”

Watch ‘Sea of Hope’ on JTBC

‘Sea of Hope’ is aired on JTBC every Tuesday, with the duration of each episode approximately one and a half hours. As reported, the show has just a total of 10 episodes.

The concept of this South Korean variety show is a seaside bar. The stars prepare homemade dishes and perform music for the guests.

ROSÉ and ONEW will sing Lucky by Jason Mraz and Colbie Caillat next week!

More to read about Kpop & Kvariety: 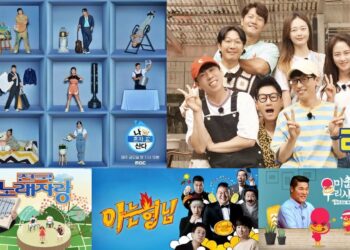