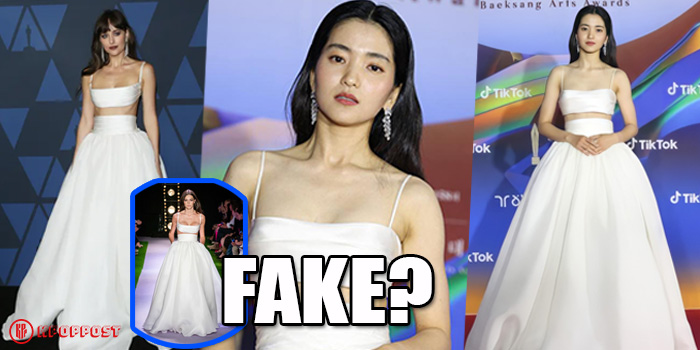 Kim Tae Ri allegedly wore a fake Brandon Maxwell dress while attending the 58th Baeksang Arts Awards 2022. Check out how the truth finally revealed as follows through the spokesperson of the actress’ sponsor.

On May 8, various Korean media reported that actress Kim Tae Ri had faced an allegation that she had worn a fake designer dress during Baeksang Awards 2022 ceremony. Kim Tae Ri’s beautiful white dress was supposed to be a masterpiece by Brandon Maxwell. However, some Chinese and international netizens believed that Kim Tae Ri’s dress was actually a fake.

According to the allegations, Kim Tae Ri fake Brandon Maxwell dress accusations appeared because there was a significant difference between the dress she wore and the ones that appeared during Brandon Maxwell bridal collection show.

Furthermore, it was not the first time the white Brandon Maxwell appeared to the public outside the catwalk. In 2019, Hollywood actress Dakota Johnson wore the same attire while attending the 2019 Governor Awards.

While both dresses seemed to be the same, there was a significant difference in the chest part of the dress. The Brandon Maxwell dress Dakota Johnson wore was more similar to the one on the fashion show. The front part of Dakota’s top was slightly slanted, while Kim Tae Ri’s was more fitting to her figure.

Considering the major significance between both dresses, some international netizens believe that the Brandon Maxwell dress Kim Tae Ri wore was most likely fake. According to the alleged claims, since Kim Tae Ri got her dress sponsored by the designer’s brand, it was impossible for her to alter the detail of the dress completely.

But was it really?

Finally, a day after the rumor started circulating on the internet and social media, the truth finally revealed. The actress’ sponsor gave a complete explanation about the Brandon Maxwell dress Kim Tae Ri wore.

On May 9, the chief design editor of Kim Tae Ri’s sponsor explained that the designer dress Kim Tae Ri wore at the 58th Baeksang Arts Awards 2022 was an ORIGINAL Brandon Maxwell dress.

Further in the explanation, the chief editor also mentioned that they had indeed altered the Brandon Maxwell dress Kim Tae Ri wore to fit the actress’ smaller body proportion. These alterations were the reasons the dress appeared slightly different from the ones in the fashion show and of Dakota Johnson.

“Kim Tae Ri’s dress is an original and genuine dress from a brand called Brandon Maxwell.

We modified the dress to fit the actress’ body, since everyone has different body types. It wasn’t even a major alteration because we only tailored the dress to make it smaller.”

In addition, the chief editor emphasized that the designer brand has the right to alter their attires according to the client’s body measurement. Since the dress was not custom-made, additional changes would be necessary to fit the model’s different body types.

“Since this is not a custom-made dress, we need to tailor the clothes according to our model’s body frame. So, for example, we alter the sleeves of Chanel jackets according to each model’s measurements. That is why sometimes it may seem like it had caused minor alterations.”

Kim Tae Ri and Her Stunning Appearance in an Original Brandon Maxwell Dress – All We Need is A Wedding Bell and A Groom!

All in all, now that we have the complete explanation from her sponsor, there is no more doubt about the authenticity of the Brandon Maxwell dress Kim Tae Ri wore at the 58th Baeksang Arts Awards 2022 ceremony.

Besides, no matter what dress she wears, actress Kim Tae Ri and her innocent beauty and sweet smile will always steal all the attention. Especially in that gorgeous white dress, Kim Tae Ri emanates the elegance of a beautiful bride, an accurate representation of Brandon Maxwell’s bridal masterpiece. Now, all we need is just a wedding bell and—of course—the groom.

So, what do you think about this fake designer dress issue of Kim Tae Ri? Feel free to share your thoughts in the comments and stay with Kpoppost Instagram, Facebook, and Twitter for more Kim Tae Ri updates.

In the meantime, here’s Kim Tae Ri’s acceptance speech for her TikTok popularity at the 58th Baeksang Arts Awards 2022.