The in-house producer and songwriter of Pledis Entertainment, BUMZU, is best known for his work with SEVENTEEN and NU’EST. However, he has worked with many other Kpop idols, such as 2PM, Rain, Fromis 9, and BTS Jin.

In 2022, BUMZU was definitely worth our attention. If you enjoy the western guitar in HOT and shimmering piano in Darl+ing in SEVENTEEN album Face the Sun, all thanks to BUMZU. Besides, he also helped craft most of BAEKHO’s solo debut album Absolute Zero. BUMZU’s name is also all over NU’EST albums, including their first and only compilation album, Needle & Bubble.

If you are a fan of LOONA, NCT DREAM, NCT 127, SuperM, MONSTA X, or IVE, you might have been familiar with a producer, songwriter, music engineer, and DJ, Alawn. The multi-platinum producer with more than 18 Billboard #1 chart entries has shaped the sound of Korean music.

In 2022, Alawn worked with BAE173 for their song DaSH and KAI for his sophomore album’s title track, Peaches. Not only that, but Alawn is also behind the successful debut song of IVE, Eleven. Other significant works in 2022 are LOVE DIVE by IVE, Focus by Ha Sung Woon, Eye on You by Wonho, and Real Love by Oh My Girl.

One of the most remarkable debut songs in 2022, O.O by NMIXX, was produced by the singer-songwriter Charlotte Wilson and her team at the production studio The HUB. Her incredible work once again dubbed her as one of the noteworthy Korean music songwriters and producers who shaped the sound of global music with NMIXX’s DICE and VERIVERY’s Tap Tap.

To complete the tribute to Korean music songwriters and producers who successfully shaped the sound of Korean music in 2022, we should not skip the Grammy-nominated producer, Dem Jointz. Many of his works become viral on social media, including 달려라 방탄 (RUN BTS), NMIXX’s B-side TANK, and NCT 127 Time Lapse.

Meanwhile, the Swedish songwriter-producer, Ylva Dimberg, has shown her ability to make every man in the South Korean military dance along to her songs. From Hype Boy to the controversial Cookie and the latest hit, Ditto by NewJeans, Ylva gets worldwide attention. Additionally, she reunited with Girls’ Generation for their reunion song Forever 1 and ITZY on their B-side 365.

The next songwriter-producer shining in 2022 is from The Netherlands, Ronnie Icon. He has been working with many big names, including TWICE, NCT127, TOMORROW X TOGETHER, and THE BOYZ.

He started this year with a hit song by ENHYPEN, Blessed-Cursed. Icon also contributed to LE SSERAFIM’s debut EP on Blue Flame, one of the best B-side tracks in 2022. And he continued his outstanding work with LE SSERAFIM on ANTIFRAGILE and No Celestial. Additionally, Ronnie Icon contributed to the hit songs, like LOVE COUNTDOWN by Nayeon featuring Wonstein and some tracks with THE BOYZ, YOUNITE, and WJSN.

If you say you are a Kpop enthusiast, you must know Peter Chun, more popularly known as SOFTSERVEBOY. The rising star producer shaped the 2022 sound with the additive 둠두둠 (Doom Du Doom) by P1Harmony and melodic pop-rock songs like TFW (The Feeling When) by ENHYPEN.

Not only that, but SOFTSERVEBOY also worked with SORN for her comeback song Scorpio and took part in Just B 3rd mini album = (Neun) on the title track Me = (나는).

Ellen Berg is one of the talented Korean music songwriters who have shaped music in 2022, primarily with soloists. Wonderland by AleXA is one of her significant highlights this year. Ellen Berg also took part in the trending solo debut song of Nayeon, POP. Not only that, Let It Fly by Suran, DEEP by HYO, and Yummy Yummy Love by MOMOLAND featuring Natti Natasha are a few of her gems in 2022.

Who’s a prominent songwriter behind some music from HEIZE, Psy, and GIRIBOY? GLEAM co-wrote the B-side track 여행자 (Traveler) from HEIZE’s album Undo and Psy’s track 나의 월요일 (Hello Monday). Not only that, but GLEAM also collaborated with singer-songwriter ADORA for her first album ADorable Rebirth.

One of the members of the Indie rock band Glen Check, JUNE ONE, became a popular name among idol groups that brings rock music. One of his highlights this year is Dreamcatcher’s VISION, which gained him more attention from fans. In addition, he featured and produced BAEKHO’s B-side track, We Don’t Care No More. And his latest work in 2022 is the remix of WIN by ATEEZ, released on December 30.

Here’s Song Hye Kyo MASSIVE Dedication for Netflix THE GLORY Strip Scene – What Did She Do? 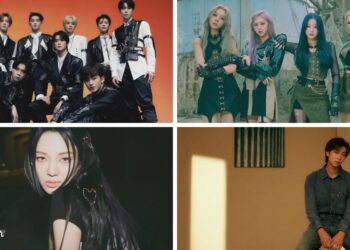