by Yoonhee Lee
in Kpop News
3 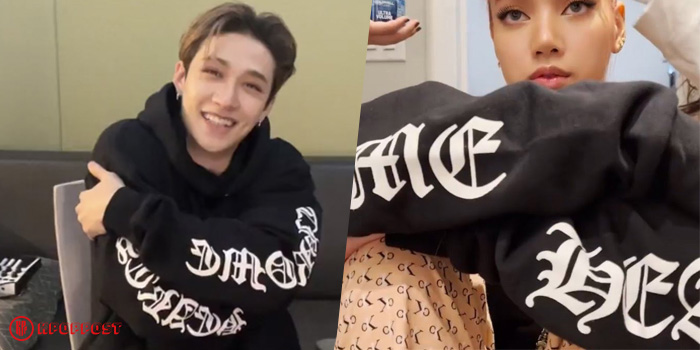 The leader of 4th gen leader, Stray Kids Bang Chan, has a very generous close friends who got him a birthday present even when it’s late: BLACKPINK Lisa gifted him hoodies! Better yet, they’re matching hoodies! How so? Let’s find out the complete info.

Nothing is ever late and impossible if you consider that special someone is close and important for you. Just like BLACKPINK Lisa and her way of gifting Stray Kids Bang Chan, her very close friend, a birthday present even when it’s been three months since October 3, which is Bang Chan’s birthday. Nevertheless, Stray Kids Bang Chan LOVES the present so much it has become his new favorite!

On January 8 through his VLIVE Chan’s Room Episode 140, Stray Kids Bang Chan stated that the hoodies he was wearing was, in fact, a birthday gift from his close friend, BLACKPINK Lisa.

“Got this hoodie as a present. I think it’s my new favorite hoodie right now. Hahaha… You guys probably know who it is. I actually got it from—um—someone who is ‘pretty savage’, and someone who’s—umm—yeah—who has so, SO much talent. Yeah. I got it from Lisa.”

Bang Chan: “Thank You for the VERY LATE Birthday Present—hahaha!”

So, thank you very much for the VERY late—hahaha—VERY late birthday present. But umm…oh, it doesn’t matter! Thank you so much!”

So, you may be wondering now that there’s a birthday gift involved, how close are Stray Kids Bang Chan and BLACKPINK Lisa? Are they in a relationship? The answer is yes! Bang Chan and Lisa are, in fact, have been in a close friends relationship for a long time now.

Previously in a Chan’s Room VLIVE session, Stray Kids Bang Chan also revealed that he and BLACKPINK Lisa had been close friends. Moreover, Bang Chan had known Lisa since their trainee days, and since Bang Chan training was in 7 long years, he’s been close friends with Lisa for quite a while.

“I’m actually really close with—umm—Lisa, ‘cause I actually knew her since I was a trainee.”

Now, how did the two of them meet? The answer is from a mutual friend, GOT7 Bambam. Since these two groups have been really close with each other, and Bambam is Lisa’s childhood friends, they finally got close together.

chan said he’s really close with lisa from blackpink! he’s known her since he was a trainee pic.twitter.com/kiv7VMT2pj

What Hoodie did Lisa Give Bang Chan?

Finally, are you curious what kind of hoodie did BLACKPINK Lisa give Stray Kids Bang Chan? As a matter of fact, Lisa gifted Bang Chan a Chrome Hearts’ black hoodie collection that is worth around 800 USD.

Wow! That’s a truly remarkable birthday present! Would you gift it for your close friends, Kpop fans?

At last, now that the birthday gift has been signed, sealed, and delivered, Stray Kids Bang Chan and BLACKPINK Lisa own matching hoodies as a sign of them being close friends! How do you think does it look like when these two are wearing the hoodies at the same time, Kpop fans? We surely are all curious!

Stay with Kpoppost for more Kpop and Kdrama info and updates. In the meantime, here’s the full episode of Chan’s Room Episode 140.