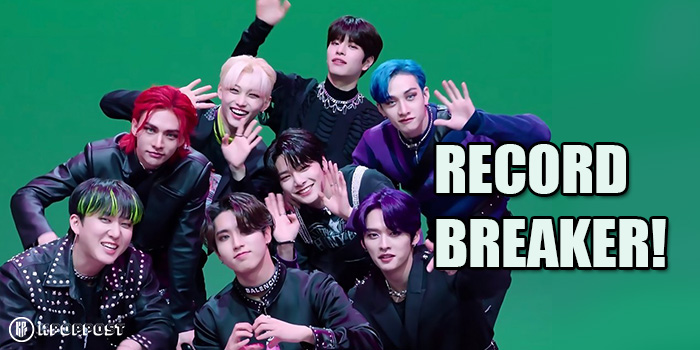 Stray Kids has ONCE AGAIN broken multiple records with their “ODDINARY” comeback album songs, including their first-week sales and iTunes charts worldwide. Unfortunately, these achievements happened while SIX of Stray Kids members tested positive for COVID-19. Check out the following complete details.

On March 22, reports mentioned that the sales of Stray Kids “ODDINARY” comeback album had reached over 700,000 copies in the Hanteo chart in just 4 days. This record has broken Stray Kids previous sales record of 641,589 copies during the entire first week for their “NOEASY” album.

The point is that it has not even been 7 days after the “ODDINARY” release. Therefore, aren’t we all just curious about how much more the sales will increase during the next 3 days for Stray Kids “ODDINARY” comeback album?

Along with breaking their first-week sales record in just 4 days, Stray Kids “ODDINARY” album songs have also topped the charts for iTunes worldwide.

Earlier on March 19, Stray Kids “ODDINARY” title track, “MANIAC,” reached #1 for iTunes Top Song charts in 35 countries. Today, it has taken over the #1 spot in iTunes charts worldwide for 53 countries, including US, Brazil, Japan, Australia, Germany, and more.

Congratulations #StrayKids! "ODDINARY" is the first 2022 K-pop release to reach/debut at #1 simultaneously at;

At the same time, Stray Kids “MANIAC” title track has entered Spotify’s Global Top 200 chart at #25 on its release date on March 18. This achievement is 61 spots higher than Stray Kids “NOEASY” title track, “Thunderous”, which entered at #86.

Since then, Stray Kids has completely taken over the Top Global Song chart on Spotify with “MANIAC”, “VENOM”, and “Charmer” songs from “ODDINARY” comeback album.

This makes Stray Kids the third Kpop group who managed to dominate the Spotify chart not only with its title song but also with all the album’s B-side tracks.

Other ExtraODDINARY Achievements Besides iTunes and Spotify Worldwide Charts

In addition to topping various music charts worldwide, Stray Kids “ODDINARY” comeback album has also placed at #1 for daily retail album sales on Hanteo and Gaon charts for March 18 and 19.

And by the time this article was compiled, Stray Kids “MANIAC” music video had surpassed 36 million views and been trending for the whole four days on the YouTube video platform.

These amazing achievements in just 4 days once again have gained the attention of JYP Entertainment’s founder, Park Jin Young. The singer-producer personally showed his appreciation and congratulated Stray Kids via an Instagram post.

“All songs in the album <ODDINARY> entered the Spotify Global Top200. 3rd K-pop group ever in history. So happy for SKZ & STAY!!

Unfortunately, in the midst of their extraODDINARY achievements, Stray Kids has to postpone all their promotional schedules and activities for the week.

Despite having been vaccinated and not showing any symptoms, all six members of Stray Kids will be staying in separate living spaces during their COVID-19 quarantine, according to the health authorities’ guidelines.

Stray Kids Lee Felix and IN are the only remaining members to have COVID-19 close contact status.

Finally, let us all celebrate together for Stray Kids extraODDINARY achievements for breaking first-week sales and worldwide iTunes charts with “ODDINARY” comeback album songs! And remember to wish the Stray Kids members to recover very soon from COVID-19. That way, they can resume their highly-anticipated activities and come back stronger with us.

More to read about Stray Kids: