by Jihye Park
in Lists
2 Now, we have prepared several scenarios for each of your favorite idols. Therefore, please choose the best scenario that perfectly suits these male Kpop idols as divine characters in fantasy romance dramas. Are you ready? Let’s check it out!

First and foremost, when talking about the best male Kpop idols for divine characters in fantasy romance dramas, BTS Jin will still be on top of the list. Best known as Visual King and World’s Perfect Male Face Jin, his charm and mesmerizing beauty will suit whatever role given to him. Not only historical dramas, but his heavenly visual and beauty will also be best suited for divine or immortal characters in fantasy romance dramas.

Today, let us imagine BTS Jin as the fallen angel who once ruled the heavenly army.

Because he’s fallen in love with a mortal, he had to face the consequences and lose his divine power. So he’s now ruling Hell as a fallen angel as he waits to meet his beloved just one last time.

Secondly, we simply cannot deny that the flawless beauty of Stray Kids’ Prince Hyunjin will be one of a kind among male Kpop idols for divine characters in fantasy romance dramas. His sultry gaze will soon compel us into doing whatever he wants, and let’s just be honest; we will be happy doing it for him.

Now, Stray Kids Prince Hyunjin will appear as an immortal vampire who’s been living for hundreds of years in a secluded town. He doesn’t want to get involved with humans unless it’s for feeding time. Due to his tragic past, he has never wanted anything except one thing: he just wants to die peacefully.

This edit was made for HYUNJIN wtf!
He looks like he came out of a fantasy drama or series🔥😩 pic.twitter.com/pRDM6zbnvx

Thirdly, the godlike and flawless beauty of BTS V has made him look like someone who just came out of a luxurious and rare portrait. One might even think that he’s one of those immortal Gods from Greek mythologies due to his strong face line and alluring stare.

And let’s just imagine it that way. BTS V is a Greek God known for his beauty and brilliance that beats everyone, including the mighty Apollo himself. Due to these circumstances, the other Gods tried to trick him by sending him to the realm of mortals to die. Fortunately, someone saves him. That is why the whole Olympus hunt him down while he himself is courageously searching for his savior.

One of the best Kpop visuals we have ever known will be Jeonghan from Seventeen. This Kpop idol possesses a unique visual that deems him fit for a divine character in fantasy romance drama.

Therefore, let us take him to the imaginary world where he’s the crown prince of a Kingdom deep down in the ocean. One day, due to his anger towards humans who keep destroying his home, he decided to come out to the surface to teach them a lesson. However, later on, he starts realizing that not all humans are the same. Even more, he just falls in love with a human who, apparently, loves the ocean as much as he does.

Among these Kpop male idols, nobody can beat the innocent visual of ATEEZ Yeosang, which makes him extraordinary for innocent divine characters in fantasy romance dramas.

Hence, today we will welcome ATEEZ Yeosang as an innocent fairy who’s been living his whole life protecting the forest. Indeed, he doesn’t mind the task, and he’s glad that he can protect what he loves the most. Still, there is one thing he’s been desiring one thing: to go out of the forest and see the world just one time.

can I please have yeosang in a fantasy drama about a fairy who lives in a forest and falls in love with someone who gets lost in the forest and they could talk about saving the planet bc that would be so cute pic.twitter.com/zXgGeW7uVI

One day, Yeosang the Fairy sees the opportunity to make his desire come true. Therefore, he decides to leave his forest to see the world. Little did he know that the forest was left unprotected without him. That is why, when he returns, everything has turned into ashes.

The forest is gone.

Now, he’s determined to find out who did such horrible deeds and go undercover in the world of mortals.

yeosang is a real fairy and here’s a proof pic.twitter.com/5yQ1zdvBM8

6. NCT Jaehyun the Lord of Vampire

Next, we have NCT Jaehyun, whose visual is among male Kpop idols who fit as the vicious divine characters in fantasy romance dramas. Just look at his stunning appearance during “SMTOWN Wonderland 2021” and imagine the following scenario.

Sitting on the Vampire throne for too long has made him lose his compassion. So the Vampire Lord, NCT Jaehyun, decides to wipe out the entire city and turn the people into his loyal subjects. However, not everyone is willing to kneel before him. That’s why a female mortal started to gather the remaining people to stand up against this Vampire Lord.

Indeed, he may not have the most perfect visual according to the male Kpop idols standard, but Stray Kids Felix has the complete package of divine characters for fantasy romance dramas. Don’t you believe us? Let’s try imagining this scenario.

In the world where mortals are living happily in their obliviousness, there live the guardians who’re destined to protect the universe and its mortals from demonic creatures. Stray Kids Felix is the direct descendant of the ancient wizards who’ve been protecting the world for every generation. However, this descendant does not wish to live like that. Stray Kids Felix just wants to live a normal life like other humans of his age. So he keeps trying to deny his power.

Until one day, the demonic creatures start attacking his friends and the one he loves the most. Therefore, he finally reaches deep into his heart to accept who he truly is and unleash his ultimate power to save everyone.

to further prove this point — keep in mind the hand that grabs that newspaper belongs to felix who we see in noeasy trailer and thunderous mv have dokkaebi like powers (signified by the blue) pic.twitter.com/aX2WZ0oC3e

Who said that being undead means having scary and vicious looks? NCT Taeyong will give you an opportunity to change your perspective. Among the male Kpop idols, NCT Taeyong has a perfect combination of royal grace and thrilling stare at the same time. Therefore, let us imagine him as the undead prince who possesses the perfect visual to lure humans into his realm.

But once he meets his destined lover, can he really sacrifice himself so his lover can live?

I sound like a broken record but Taeyong in a fantasy film/ drama as an elf or fairy when? pic.twitter.com/AYJ163oaah

9. The Boyz Juyeon the Lovely Gumiho

They said that Gumiho would gain one tail every 100 years. But that’s not the case for The Boyz Juyeon. Due to his lovely and kindness, the deity grants him the absolute power of nine-tailed gumiho in just 100 years. If he can spend his remaining years living the same way, he will become human and be with his destined lover.

However, just before he turned human, someone has murdered his lover to the point that she could no longer reincarnate. Due to his immense fury, he loses control of his power and wipes out an entire village with the killer in it. What do you think is going to happen to his character then?

After all, it’s too bad to have The Boyz Juyeon’s mythical visual for a plain old mediocre story.

Last but not least, among these Kpop male idols, there is one last person who possesses hidden visual that will best suit divine creatures in fantasy romance dramas: NU’EST Hwang Minhyun. Let’s imagine the following scenario for him.

Nobody knows who or what he is. He’s simply someone who’s existed in the world since the beginning. His power, his looks, his attitude are beyond Godly, and he knows that. That is why he’s always careful in everything he does. One single wrong movement and everything will perish.

He knows he’s dangerous. That is why he stays hidden from people. And what’s better than hiding in plain sight? That’s why he moves among people and wipes their memories about him along the way. Until one day, this memory-wiping power doesn’t work on this one curious girl who keeps following him everywhere due to her curiosity. Now, what do you is going to happen to them, Kdrama fans?

In the meantime, here are funny moments from one of the best Korean fantasy romance dramas, Goblin. Also, stay with us at Kpoppost for more Kdrama discussions.

2022 Weverse Con Kpop Artists Shared Their New Year’s Resolution – Some Are Our Resolution Too! 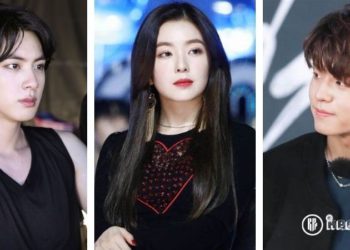 2022 Weverse Con Kpop Artists Shared Their New Year’s Resolution – Some Are Our Resolution Too!