Korean drama lovers are offered a new action-adventure with some sprinkles of thriller and drama. The newly released Korean original series released by Netflix ‘Squid Game,’ can be watched worldwide on September 17, 2021. However, there are things we need to remember while watching this Kdrama.

Once you watched the ‘Squid game‘ trailer you’ll know exactly that this series is a survival game drama. Nevertheless, the director and writer, Hwang Dong-hyuk, didn’t forget to give more taste for the viewers to enjoy. ‘Squid Game‘ includes an edgy thriller, horror, as well as drama. It even contains dark comedy, which makes it more exciting.

“Squid Game is a vibrant, stylish and edgy contained thriller/horror/drama. Enjoyable tints of dark comedy make the product even more exhilarating than it wants to come across.”

2. Its initial title is ‘Round Six’

Another trivia fact about ‘Squid Game‘ is that the title was initially not ‘Squid Game.’ In September 2019, Netflix announced that they would release a Korean original series, titled ‘Round Six,‘ to be written and directed by Hwang Dong-hyuk.

Despite its cold violence and blood, in fact, ‘Squid Game‘ series features children’s games, such as ‘Mugunghwa has bloomed (무궁화꽃이 피었습니다)’ game, which is similar to ‘What’s the time, Mr Wolf’ game.

Hwang Dong-hyuk revealed that the story of ‘Squid Game‘ was inspired by manhwa (Korean comics) that he read.

“At that time, I went to bookstores often. And when I read many manhwa, I want to make a story similar to the ones in the manhwa that I read.”

#SquidGame 100/100. I mostly love how the drama show us the side of the worker(bad side) too though it would be more perfect if they explained why is the worker forced to do it + why does lbh is the front man. But I guess bcs all netflix drama have second season pic.twitter.com/NSIWVwHTUO

In the Netflix press conference, Hwang Dong-hyuk revealed that he has finished writing the script for ‘Squid Game‘ since 2009. However, people still doubt the concept of the story.

“I finished the script in 2009. At that time, people felt that the script was too unfamiliar, brutal, and the plot would be too complex.”

But now, everything is closely relevant with recent real life. The fact that ‘Squid Game‘ was once doubted by many people can’t change that this series is worth-watching now.

6. Behind the striking colors uniform

A trivia fact that we need to know about ‘Squid Game‘ is that everything is done purposely. In the series, we can see that the participants are wearing green tracksuits, while the game managers wear hot pink tracksuits with black masks.

“We paid attention to the contrast of colors because both groups wear team uniforms. The wearing of uniform clothes in the same color was meant to symbolize the erasing individuality and personality.” Hwang Dong-hyuk to a South Korean film magazine

The casting of ‘Squid Game‘ was confirmed on June 17, 2020. However, they have to halt the filming in August 2020 due to the COVID-19 outbreak in South Korea. Therefore, ‘Squid Game’ resumed filming in September 2020.

8. They use an actual set

The other trivia fact about ‘Squid Game‘ is how dedicated the director to the series is. Entering the filming set, ‘Squid Game‘ casts were surprised by the set design. The size and details are all precisely the same as what we saw in the trailer.

“The set and the giant doll are exactly what we see on screen. Everything amazes me.”

The director Hwang Dong-hyuk said that he wants to use computer effects as least as possible, making the series more real.

The story said that there are 456 people are participating in the game. The number is actual. Not only Hwang Dong-hyuk builds the real set but also includes exactly 456 people during the filming.

However, as the story goes, people are eliminated, and it makes Park Hae Soo sad.

“I see them going home after the elimination, and I can feel the room is emptier. It also makes me feel emptier.” Park Hae Soo

10. The participants of the ‘Squid Game‘ have a different story

‘Squid Game‘ gather people who are willing to risk their lives in a mysterious survival game for a KRW 45.6 billion prize. The 456 people invited to play the game have different stories and reasons to join the game.

Here are only some of them:

Have you started watching the 9-episode Korean original series ‘Squid Game’ on Netflix? If you haven’t, you might want to watch the trailer first: 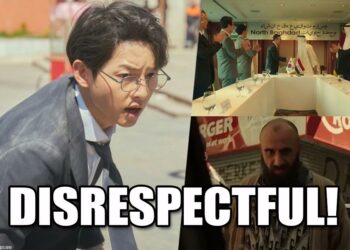