20 Fun Facts about Mamamoo that you should know 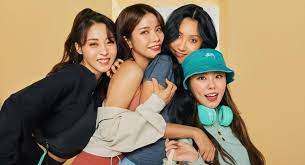 Mamamoo, written mostly as MAMAMOO, is a South Korean group first launched by RBW in 2014.  The first time they came together, formally as a Kpop girl group, was in June 2014 with their single, “Mr. 애매모호 (Mr. Ambiguous).” One of the fun facts about Mamamoo is that music industry experts considered the first release as a standout amongst other Kpop new releases in 2014.

When it comes to this girl group, you may think you know it all. Since their debut in 2014, they have kept fans wanting for more. However, besides their amazing songs and shows, there is more that you should know about them.

Here are 20 fun facts about Mamamoo that you should know.

Though Mamamoo is a name, we all love. But did you know that they could have been called 160 (because of their height), Orange, or belly button?

2. The group has a history

Hwasa, Moonbyul, and Solar, even before their debut, used to live together on a rented rooftop house. This definitely explains the chemistry they deliver each time.

3. Petzi was the first choice

For Ahn Hyejin, her choice for first name was Petzi (a character from one of Korea’s Children stories). However, after much contemplation, she decided on Hwasa.

4. Prior training hence the perfection

Moonbyul and Wheein have had immense Training before being a member of Mamamoo. They have both been trainees at T-ara, D-unit, and Girls Day Trainee. There are also reports that Moonbyul and Wheein were supposed to debut with another group; with Moonbyul as the leader of the same.

5. Moonbyul’s debut was planned for d-unit

Since Moonbyul had experience as a trainee with d-unit, she was supposed to debut in the 4-member rapper group. However, she did not because of her weight. Since then, she has lost a lot of weight and kept it going.

6. Solar auditioned to be a Steward

Solar’s parents wanted her to be a stewardess. She heard the same and decided to act on that and gave several auditions. However, she failed, and one day, things changed for her when RBW approached her in a singing audition.

7. Wheein grew up with her grandmother

Besides being a fantastic singer, Wheein is also good at painting. Hence, while growing up, she was always in a dilemma, wondering which profession to choose. However, she decided on singing instead, and we have been lucky, isn’t it?

9. Only, Eldest and Youngest in the Family

While Wheein is the only child, Solar is the younger one (she has an elder sister), and Moonbyul is the eldest among her siblings.

10. Moonbyul was born under the bright night sky

As per the report, when Moonbyul was born, the night was brighter with bright stars everywhere. Her name has hence been inspired by the star (Byul-star).

11. Solar could have been a Police Officer

Solar joined singing classes at an early age, but she always aimed to be a Police Officer.

Solar and Moonbyul’s friendship has always been encouraging. It was Solar who once advised Moonbyul to get into rapping.

Moonbyul once stated her love for female fans over male fans. The reason being that she can connect better with them.

14. Guess whose favorite number is 2?

15. When inspiration is her mother

Wheein’s mother was from an art background, and hence she continuously advised and inspired Wheein to focus on art.

Wheein and Hwasa met way back when they were in middle school. They do visit the town that they grew up in every time they have a free schedule.

17. Solar: A Combination of Two

Solar’s name has been inspired by two meanings. One, Solar, which means harmonies and high notes, and the second meaning the sun.

Solar’s choices have changed over the years. She admits to being a darker person when she was younger as she would only enjoy Gore movies.

When Solar and Moonbyul first met, they could not hit it off. It was a sour relationship at first. However, they have grown over it and now have become much closer.

Fandom’s name for Mamamoo is Moomoo which in Korean the word Moo (무) means radish. Therefore, to some concerts, Mamamoo fans would bring some radishes. Later on, it was announced that the group’s official lightstick is in the shape of radish.

Hope you enjoyed these little fun facts about Mamamoo. Continue to shower love at them, and we hope they keep entertaining us!

Enjoy this debut song of Mamamoo: