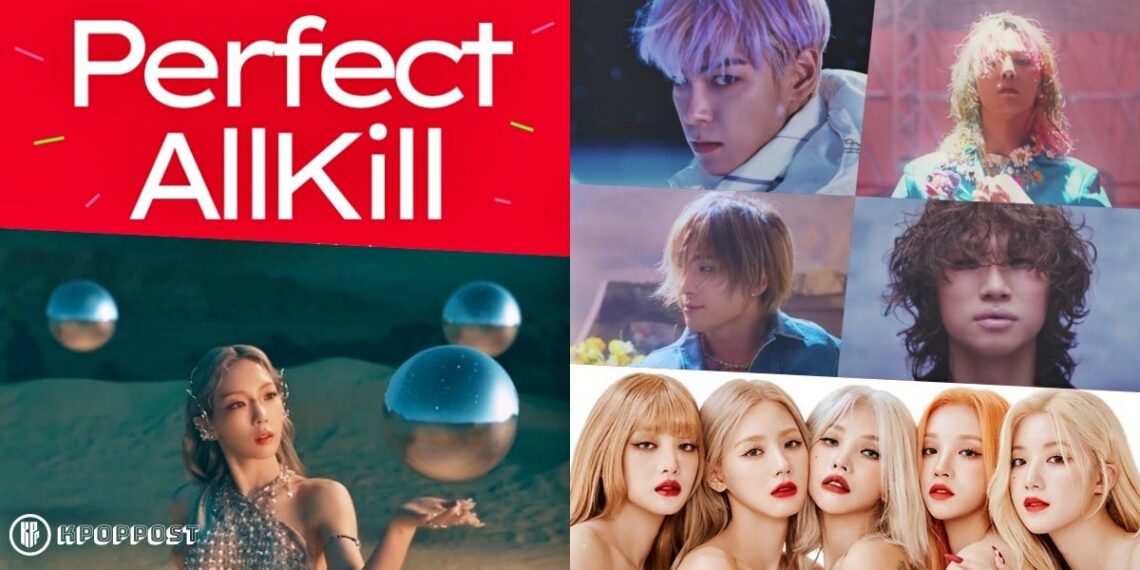 New songs that have topped major music streaming platforms in Korea on daily, weekly and real-time charts, such as Genie, Melon, Bugs, VIBE, YouTube Music, FLO, and Instiz iChart, are considered to have achieved Perfect All-Kill. After seven songs made Perfect All-Kill (PAK) in 2021, here are seven songs in 2022 that successfully reached the milestone.

Taeyeon released INVU as the title track of her third studio album with the same name INVU on February 14, 2022. On February 16, 2022, iChart announced INVU had achieved Perfect All-Kill, marking the singer’s first song to achieve this milestone.

Tomboy is the lead single of Kpop girl group (G)-IDLE’s first studio album, I Never Die, which was released on March 14, 2022. (G)-IDLE’s Soyeon participated in the song production, including writing the lyrics, composing, and arranging the music. (G)-IDLE gained their first Perfect All-Kill with Tomboy on March 24, 2022.

Last year, YG’s Kpop boy group BIGBANG made a long-awaited comeback with their new single Still Life. After four years of hiatus, the single was released on April 5, 2022. The single hit major charts in South Korea and achieved Perfect All-Kill on April 11, 2022.

Starship Entertainment’s rookie girl group, IVE, who just debuted in 2021, became the first 4th gen Kpop girl group who achieve their first Perfect All-Kill in 2022. The rookie group achieved PAK with the title track After LIKE from their third single album with the same name. The song was released on August 22, 2022, and reached PAK on September 13, 2022.

In 2022, the quintet Kpop girl group once again topped the major charts in Korea with their single Nxde, marking them the only Kpop artist who achieved multiple PAK with their songs Tomboy and Nxde. The song Nxde (read: nude) is the lead single of their fifth EP, which was released on October 17, 2022. The song achieved PAK on October 25, 2022.

The song is the pre-release single from the group’s first single album, OMG, which was released on January 2, 2023. Their first PAK in 2022, marking them as the fastest 4th generation girl group to achieve perfect all-kill in the same year as their debut. In addition, they also won their first Daesang at the 2022 Asia Artist Awards for Performance of the Year.

So, from the K-pop songs with Perfect All-Kill (PAK) above, which one is your favorite?

Please stay tuned at Kpoppost for the latest Kpop songs released in 2023, and don’t miss out on other exciting Korean entertainment updates by following our Instagram, Facebook, Twitter, and Telegram.