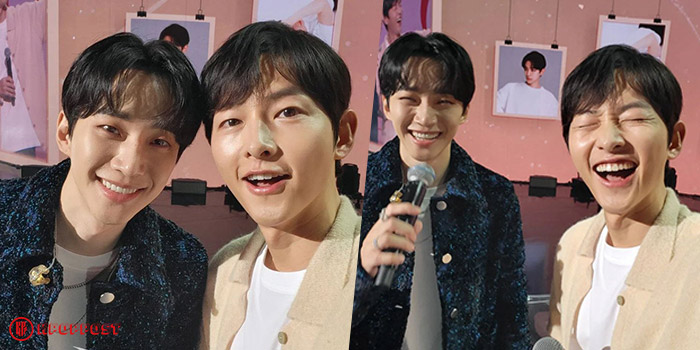 The success of his most recent historical drama, “The Red Sleeve”, with Lee Se Young has brought 2PM Lee Junho to his rising popularity and Korea’s best idol actor. The drama concluded with incredible ratings that the couple would fulfill their promises to their fans.

But before that, 2PM Lee Junho expressed his gratitude to fans by holding a solo fan meeting, “Junho the Moment,” on January 22 & 23 at the Blue Square Mastercard Hall in Yongsan, Seoul.

The “Junho the Moment” fan meeting was particularly special for Lee Junho because it has been a while since Lee Junho’s last fan meeting in 2018. So he started the event by performing his beautiful solo track, “Nobody Else”.

According to Lee Junho, this fan meeting made him incredibly emotional from its very start. Since he had been longing for this moment, he was worried and excited. Finally, however, the emotion he felt had brought him to perform successfully.

“I started tearing up at the sight of my fans after the intro to the song. I had waited for this moment for so long. I was both worried and excited.

This is the first time I felt a wave of emotions from the start of any performance. But my ambitions and pride allowed me to put on the kind of performance that I had wanted to do.”

Furthermore, the “Junho the Moment” fan meeting became even MORE special after the special guest showed up.

Furthermore, at the fan meeting, Song Joong Ki also revealed that he had always wanted to star in a drama together with Lee Junho as brothers. That’s why he asked Lee Junho to make a cameo appearance in “Vincenzo” after Junho completed his military service. Unfortunately, it was impossible due to Junho’s hectic schedule.

Joongki and Junho on one stage is too much sexiness for me I cant even hear what they saying Im having a mental breakdown bye pic.twitter.com/Hh69Vnpf3H

It is perfectly understandable how much these two wish they could star in a drama together, knowing that Song Joong Ki and Lee Junho have been brothers for such a long time. And to commemorate this moment, they decided to take a selfie together.

So, do you love this adorable friendship showcase between 2PM Lee Junho and Song Joong Ki at the fan meeting? Feel free to share your thoughts in the comment section and stay with Kpoppost for more Kpop stories. Meanwhile, here are some fan footages of 2PM Lee Junho fan meeting, “Junho the Moment”.