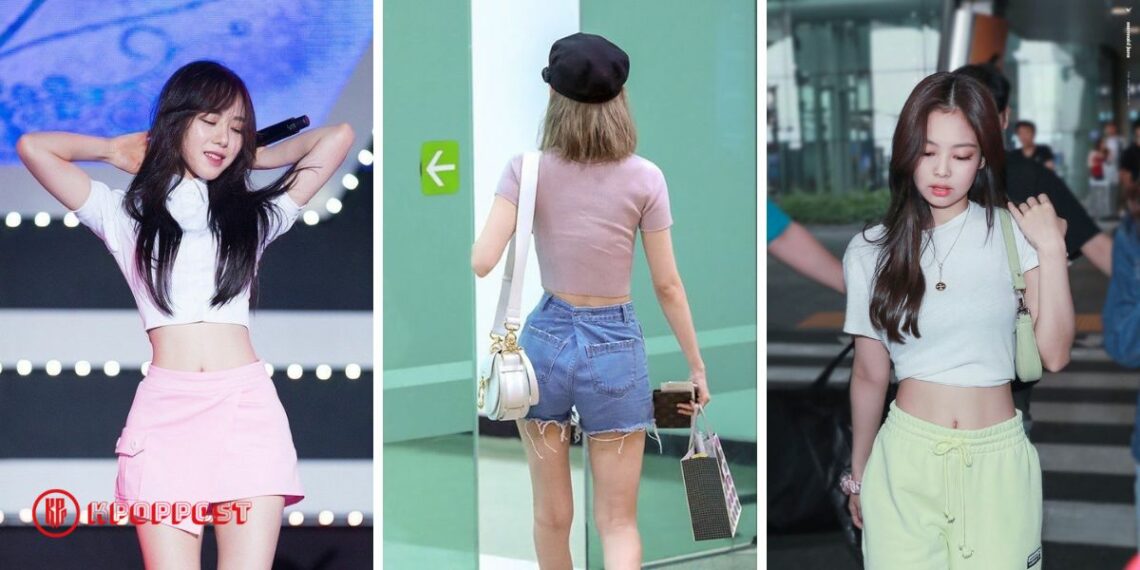 A petite body with an hourglass figure has been famous as one of the Korean beauty standards for a Kpop star. However, these female Kpop idols have an unbelievable small waist size that even can be considered the women’s smallest waist in the world.

With the perfect waist-hip proportion, TWICE Mina is known to have the small waist every girl dream of. Her waist size is around 23 to 24 inches.

Jennie has stolen attention for her crazily perfect tiny body. Jennie is known to take pilates, which helps her to shape her ant waist. Although the Kpop idol never reveals her small waist size, fans speculate that it’s around 23 to 24 inches, but it could be smaller than that.

Fans believe that Lisa is one of the female Kpop idols with a small waist size – not more than 20 inches. According to BLACKPINK’s stylist, Lisa wears size 0 pants, and her tiny waist is below 23.5 inches.

At her thinnest moment, Yoona had a 22-inches waist. Many have praised her pint-sized waist and flat stomach. But not a few also worried about her health during that time. Although she has gained weight and looks much healthier recently, she still can’t hide her hourglass figure, which means her waist is still much smaller than her hips.

The maknae of TWICE has a 20-inches waist, one of the smallest waist size in the group. No wonder fans marveled over her gorgeous body figure anytime she appeared on video or stage.

Looking at how petite her waist is, fans believe that Rosé’s waist is around 19 inches. However, the renowned female Kpop idol herself stated that her waist size is 24 inches in a variety show. Later, she said that she mixed up her waist and hip size. Hence, BLACKPINK Rosé’s waist size remains a mystery until now.

The “X” or hourglass figure of TWICE Momo is definitely enviable. She has a 19-inches waist which makes her body looks perfect in anything she wears.

Although she is not the AOA member with the smallest waist size in her group, she has gained praise for her amazing figure. Many have asked for Seolhyun’s diet tips because of this. In fact, at her thinnest, Seolhyun’s waist size is 18.5 inches.

One of the members of aespa, Winter, has gained attention for her petite body figure. Many said that she was born to be a Kpop idol. And even her bones were made to be a Kpop idol. Winter could be one of the female Kpop idols with the smallest waist size in the world. However, her precise waist measurement is still a mystery.

The fencing athlete in “Twenty-Five Twenty-One” Kdrama has a teeny-tiny waist that makes fans envy. Many fans have marveled over her tiny waist, which measured 18 inches. WJSN Bona is definitely one of the female Kpop idols with the smallest waist!

The former member of AOA, Mina, has a snatched waist! Fans believe that Mina is one of the female Kpop idols with the smallest waist size in the world. Previously, while filming the “Weekly Idol,” her waist measured 17.9 inches. Apparently, she weighed only 42.7 kg then, making her look petite.

Since her time with IZ*ONE, Sakuran has been known to have a petite body figure. She even needed to pin her shorts at the waist so it wouldn’t keep falling down. After her debut with LE SSERAFIM, she mesmerized fans with her small waist size. She likely is one of the female Kpop idols with the smallest waist size in the world. However, she keeps the precise waist size a mystery until now.

What do you think of these female Kpop idols who possess small waist size? Do they inspire you to hit the gym soon? Feel free to share your thoughts and idea in the comment. Also, stay with Kpoppost and join our Instagram, Facebook, Twitter, and Telegram channel for more Kpop updates.